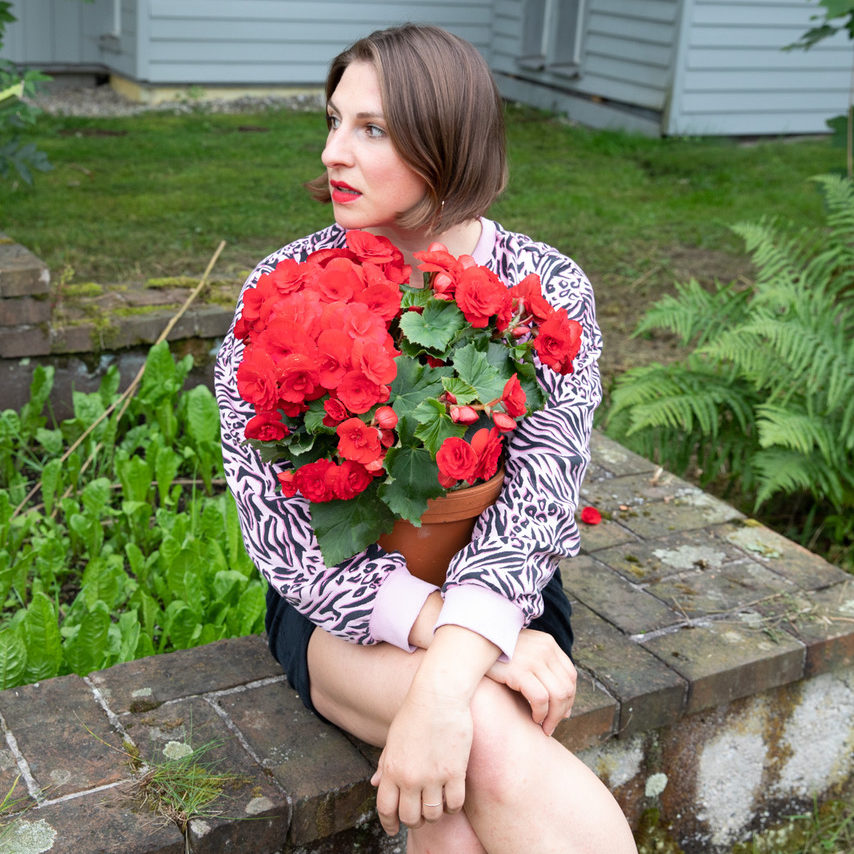 I’m Lisa Jopt and I want to become president of our union Genossenschaft Deutscher Bühnenangehöriger – GDBA. I work as a freelance actress near Munich. Since 2016 I have initiated three different annual cultural-political conferences with various comrades-in-arms*, of which I am the artistic director: for example the Bundesweite Ensemble-Versammlung, a nationwide assembly of theater professionals, or Burning Issues, a conference for gender equality, diversity and inclusion. Here you can get a short look and feel about me as an actress. 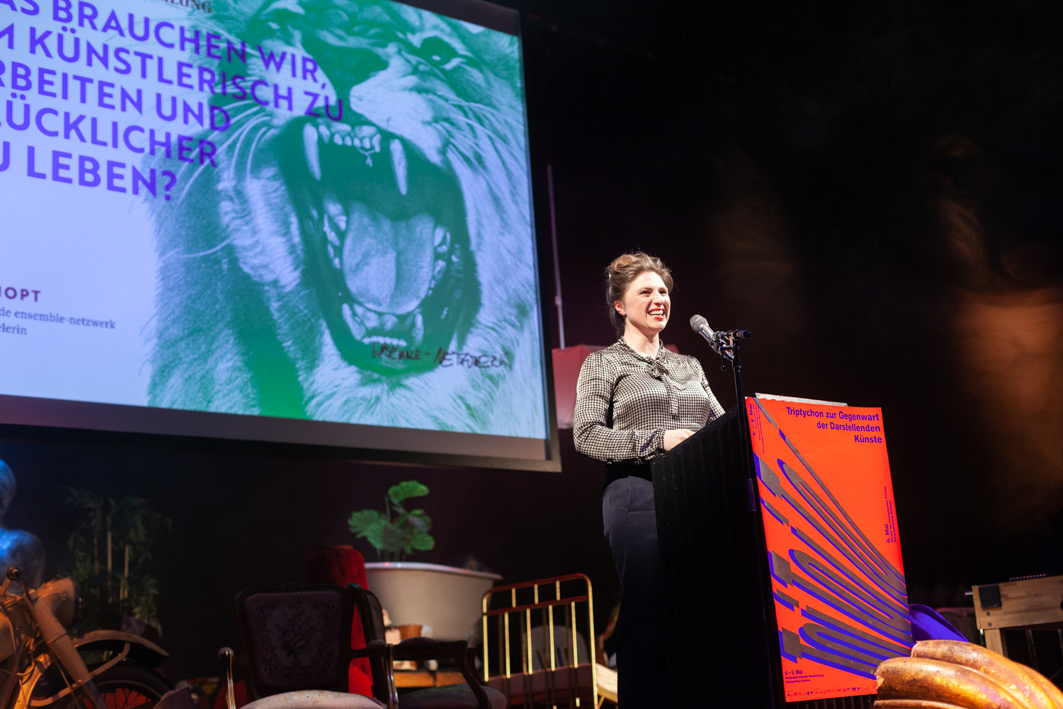 When I came to the Oldenburg State Theater in 2015, I realized that many problems can be solved through conversation, empathy and humor. This is especially true for all topics and problems about which most people said: „If you demand this, you will force theaters to shut down“. I have learned that the theaters do of course not break down. Rather, theater employees can be helped to achieve more justice, joy and quality of life. This has motivated me to think bigger and bigger each year.

As a logical consequence I now want to become president and use the knowledge and contacts of the last years’ work to become effective where our tariff and collective agreement are made: in the GDBA. We need a collective agreement that regulates fair payment, social protection, participation and working hours much more clearly. We also need collective agreements for the solo self-employed. We need visual communication that makes our goals comprehensible and motivates people to actively engage. The GDBA must abandon the gesture of alienated wage labour and show itself for what it is: a union of theater experts* in many fantastic trades who love theater and their professions.

Furthermore, I agree with the demand of the 1st Cooperative Day 1871 in Weimar: “ … (we need a) concession law to make the admission of theater directors dependent on their suitability and to protect the members of the stage from arbitrariness of the theater director“.

And by the way: I love the network dancersconnect. 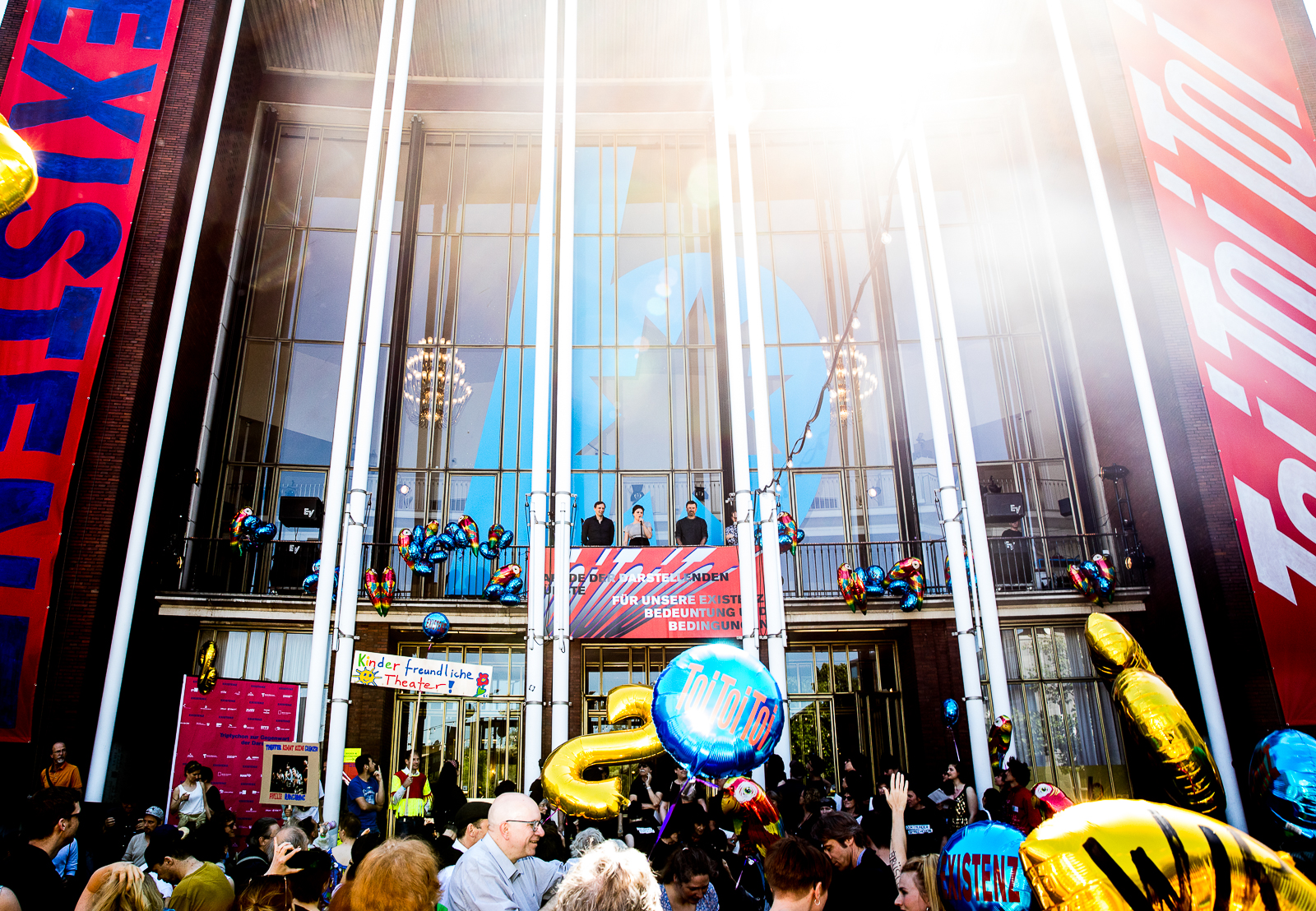 Introduction a System of minimum wages by years in profession

Five rehearsal-free days after a premiere

Ensemble representatives should have a right to information in all questions of artistic and social planning, as well as a right to discussion and consultation in all organizational matters. They should be protected from non-renewal of their contracts during their term as a spokesperson as well as  for up to two years afterwards ending this activity

These proposals are taken from the paper Ziele3000 of the ensemble-netzwerk.

Education. The GDBA needs a regularly exciting and modern educational institute that offers advanced training. E.g.: More NV-Bühne further education for ensembles & staff councils (as Adil Laraki already does), rights for professional groups, anti-racism workshops, guidelines and tips for freelancers, transition accompaniment for dancers*, guidelines and tips for self-employment for artists*, retirement provisions for dummies, financial accounting for hybrid employment relationships. It would also be conceivable that members could offer workshops themselves and thus earn something extra.

Networking-Party in Berlin. If you know how to fight, you must also know how to party. Once a year all members should meet on the fringes of the Theatertreffen in Berlin to network and celebrate. There is currently no format in which all GDBA members have the chance to meet. Not even at the Gdbas cooperative Day. At the Berlinale Movie Festival Berlin is bursting at the seams with parties and networking events. At the Theatertreffen however lost theater professionals have the feeling that they are not invited. Our industry get-together is supposed to be about a common identity and the energy it gives us.

Diversity. The needs of people with marginalized perspectives must be strengthened by the GDBA.

Departments. The professional groups ATuV, Opera Chorus, Solo & Dance must be organized in departments, so that colleagues with the same profession have the opportunity to exchange ideas, e.g. in online meetings. For example, make-up artists:innen, KBB employees:innen and opera singers:innen have the same NV-Solo, but very different professional needs.

Union Meeting. The Union Meeting must take place every year, as provided for in the GDBA statutes. It is the highest body of organization in the Union and is currently only held every four years. We want to connect to the basis better and thus this needs to change.

Fairness. The differences in the collective bargaining treatment of collectives and soloists must be overcome. The GDBA has 199 choir members and about 3,300 soloists – but why do the choir members earn more than the soloists?

Young platform. We need a department/ organization for students and young professionals.

Cooperation. We are striving for cooperation with other associations, among other things to reduce the burden of multiple memberships.

Magazine. The „Bühnengenossenschaft“ has to become a cool magazine that you really look forward to once a month. It is a figurehead of the GDBA, is displayed in canteens and can thus generate new members.

Podcasts. Podcasts are an uncomplicated educational tool. I want to produce different podcasts that meet the needs of the members. For example „theater employees have questions – experts have answers“ or a podcast about „Diversity in culture and media“.

Stars in the GDBA – Why do mainly the colleagues of the small and medium-sized companies and freelancers fight for better working conditions? Why not the stars – The colleagues who are firmly in the saddle of the industry and have nothing to fear? Solidarity is a doing word! So join in and be welcomed! Do it not only for yourself bit for your prompter or your assistant director …

YouTube channel. I would like to establish a YouTube channel, where you can inform yourself about current topics and acquire basic know-how. The GDBA must become „more googleable“. Knowledge about rights and duties must be made more easily accessible.

After graduating from the HMT Leipzig with a diploma in acting in 2010 I was engaged at the Schauspiel Essen, the Oldenburgisches Staatstheater and the Schauspielhaus Bochum. I, thus, have first-hand lived experience with our tariff, the NV-Bühne. Since 2018 I am working as a freelancer and moved to live in Bavaria since 2019.

In 2015, together with former assistant director Johanna Lücke, I founded the „grassroots-movement from a kitchen table“ ensemble-netzwerk. A movement that is close to dancersconnect. Already within its fist year the movement gained a strong momentum so that in 2016 it developed into a non-profit, registered association with an eight-member board. Like the GDBA, the ensemble-netzwerk is committed to improve the working conditions at publicly funded theaters. Our NGO has professionalized itself continuously. Since 2018 we have an office in Berlin and four freelancers* working for us. We also grew to a number of nearly 900 members and are the mothership to 3 sub-networks: the junges ensemble-netzwerk, the regie-netzwerk and the dramaturgie-netzwerk. The theatreautor:innen-netzwerk, the assistent:innen-netzwerk and the BiPoc-netzwerk have also announced to launch their work under our roof.

As the chair-woman of the board I am known for my passion for bringing socio-political content into aesthetic form, for seeing allies instead of opponents in negotiating partners, and for moderating eight demanding and very individual colleagues equally and as a team. The many professions and free spirits that the theater unites under one roof are not only dear to my heart. They really inspire me. That’s why I have been active in the ensemble-netzwerk to ensure that we offer all professions a safe haven for the work of their interests. Theater work is complex – and thus you have to think it together.

You are not alone! 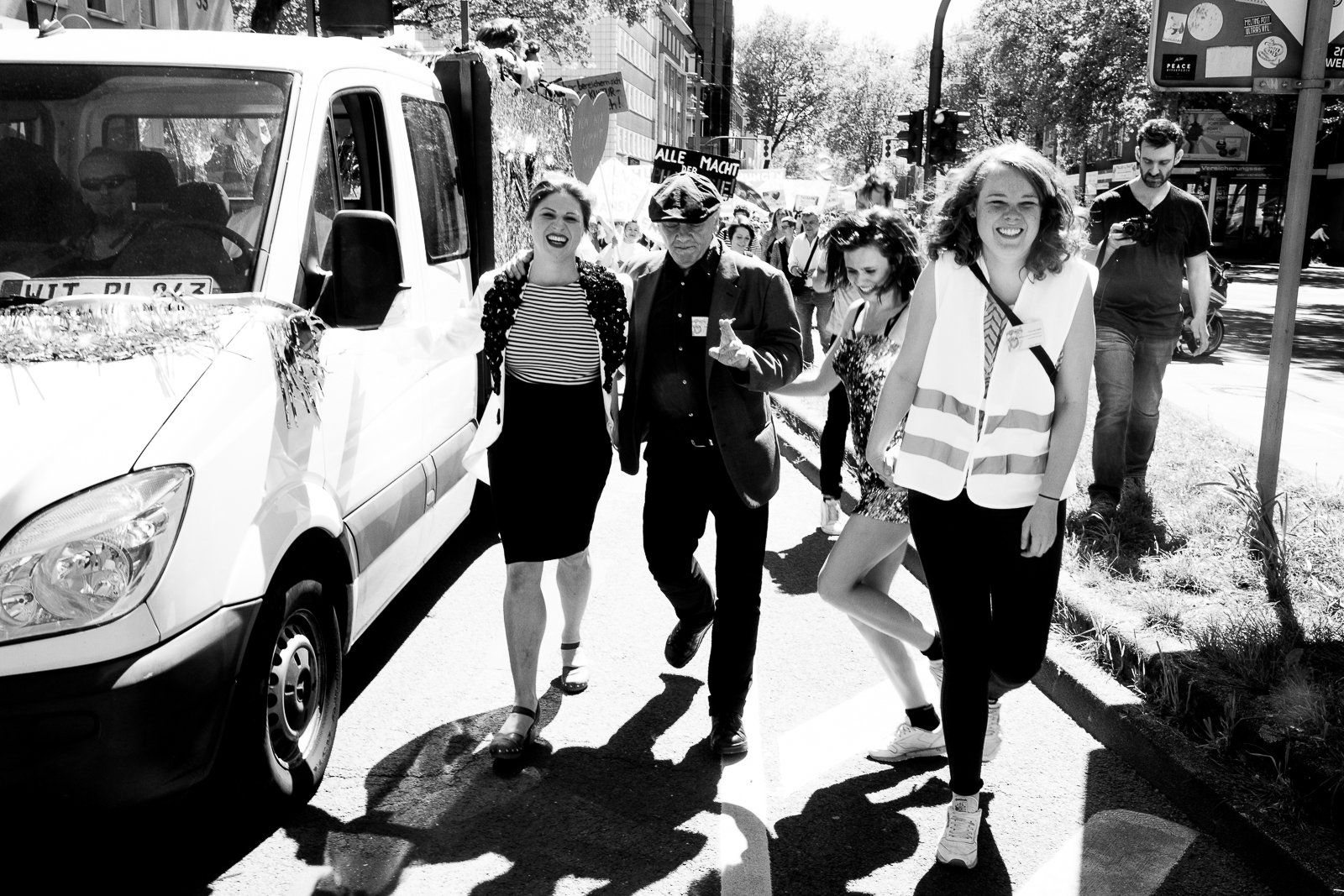 How did you get involved in the union?

Since my first employment at Schauspiel Essen I have been a member of the GDBA. We invited Jörg Löwer as a speaker at the first Konferenz Konkret in 2015 and he also sat on a panel at the first Bundesweite Ensemble-Versammlung (BEV) in 2016. In 2017 the regional chairwoman of the Nord Sabine Nolde spoke at the second BEV in Potsdam. In 2018 we invited Adil Laraki to be a guest of our panel discussion at the third BEV. At the last Konferenz Konkret Natalie Senf talked about the situation of theaters in East Germany. The GDBA has co-financed almost all conferences we have organized. In 2017, Johannes Lange and I went to Dortmund for the Cooperative Day, where we, as the local association of Oldenburg, prepared and submitted many applications. In 2018 I founded the local association at the Schauspielhaus Bochum.

Why did you found the ensemble-network?

Unfortunately, the language and aesthetics of the GBDA did not address and motivate us as young artists in 2015. Many of our colleagues did not know that the GDBA existed – let alone knew what the union does. We didn’t see our topics reflected there, such as Saturday rehearsals, fear, home office for dramaturgs, agent tables or child care. Johanna Lücke and I have achieved a lot as ensemble speakers in a short time on location in Oldenburg, such as reducing the Saturday rehearsals. This uncomplicated self-efficacy impressed us. So we asked the ensembles nationwide what they need to be able to work well artistically. The response was so overwhelming that it quickly became clear: We have to meet! This is why the ensemble-netzwerk was founded. In its political activism our network stands in relation to the union like Greenpeace stands in relation to the Green Party.

The members! The fact that the union has been around for so long proves to me in an impressive way that theater belongs to our cultural circle and that the fight for better conditions will always be worthwhile to emphasize our importance.

Why are you a member of ver.di?

At a general meeting in 2019 in Berlin, our members expressed their wish to get involved with the trade union ver.di. A common cliché is that ver.di wants to „swallow“ the GDBA. Or „flattens everything“ – in other words, wants to destroy the artistic, process-oriented work. But this is not the case. Ver.di presented us with the concept of „conditional trade union work“. This means that ver.di could negotiate the desired conditions for an ensemble (if the majority of them are members in Ver.di) that it considers appropriate. After this exciting meeting, I joined Ver.di to emphasize the seriousness of the exchange. I will soon end my membership at Ver.di for the candidacy for president of the GDBA. I will also terminate my membership in the BFFS.

What are your strengths In 3 words?

Your weaknesses in 3 words?

Impatience, red wine with cheese, coin pusher at the fair 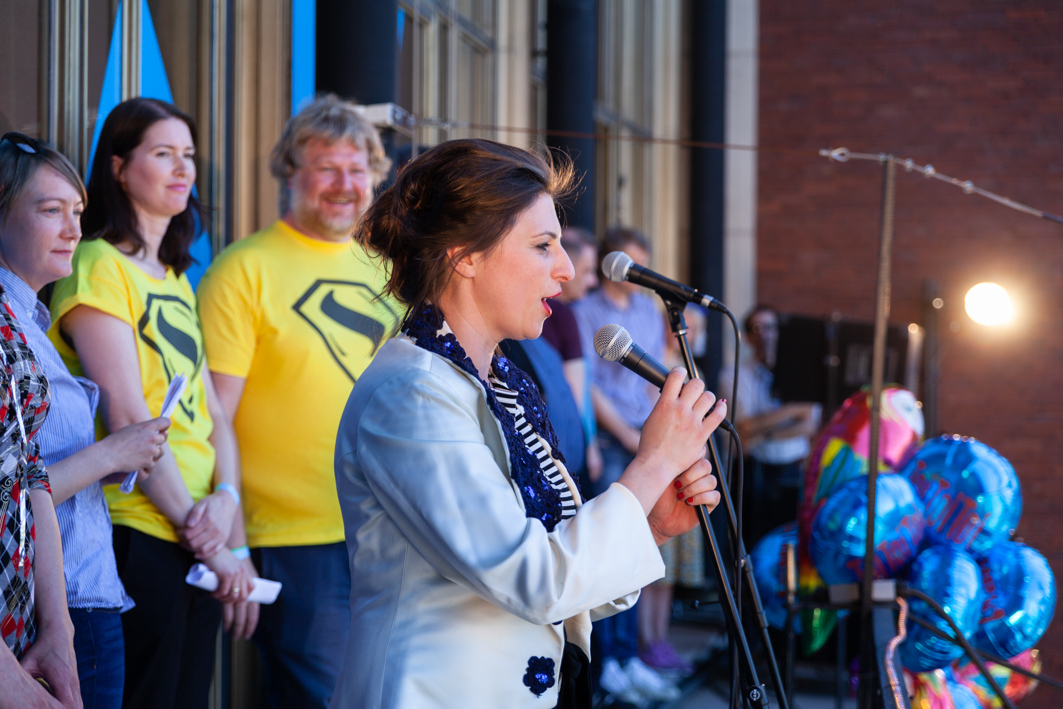 About my political work 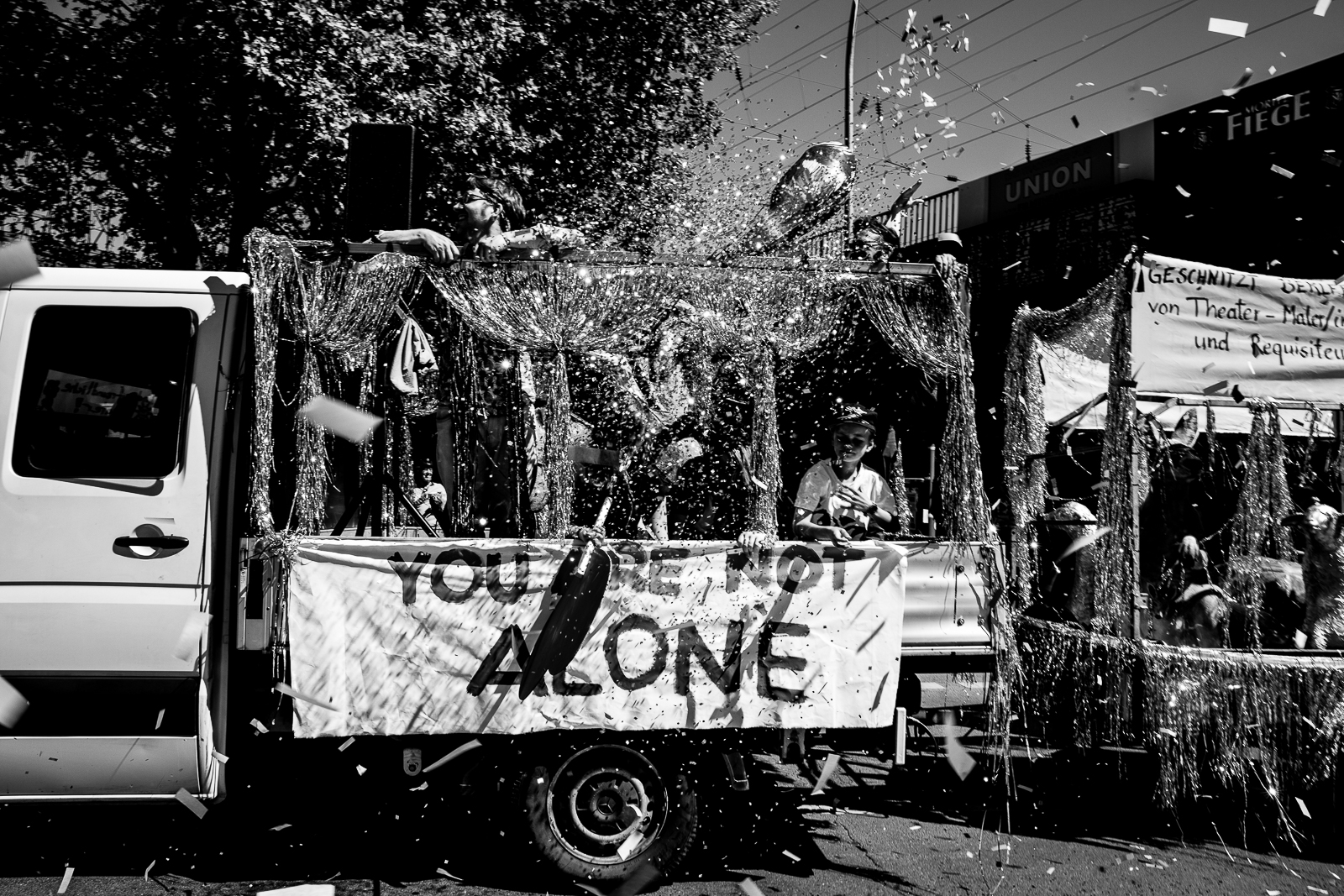